Each topic has a series of carefully graded levels, allowing students of all abilities to comfortably use the software. Teachers can create custom levels to ensure curriculum support and appropriate assessment.

Recognise a key signature and then identify the scale degree that a given note is within the key.

Identify notes on a staff, or enter notes using the tenor and alto clef.

Transposing by key or interval on the treble and bass clefs.

Identify a scale shown on screen, fix incorrect notes in the scale, or enter the scale on a staff.

Relate a mode to it’s parent major or minor scale.

Identify a scale shown on screen, fix incorrect notes in the scale, or enter the scale on a staff. 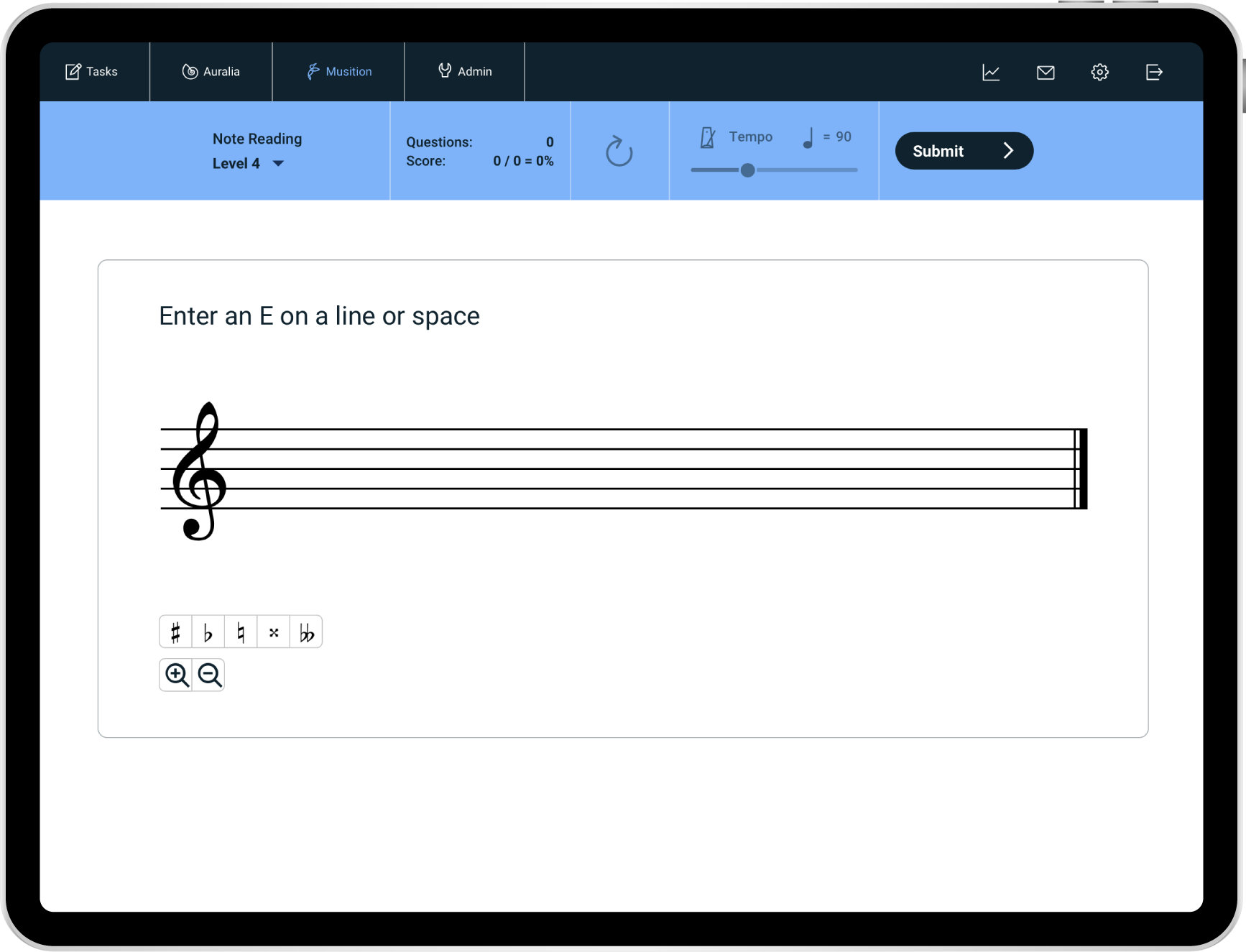 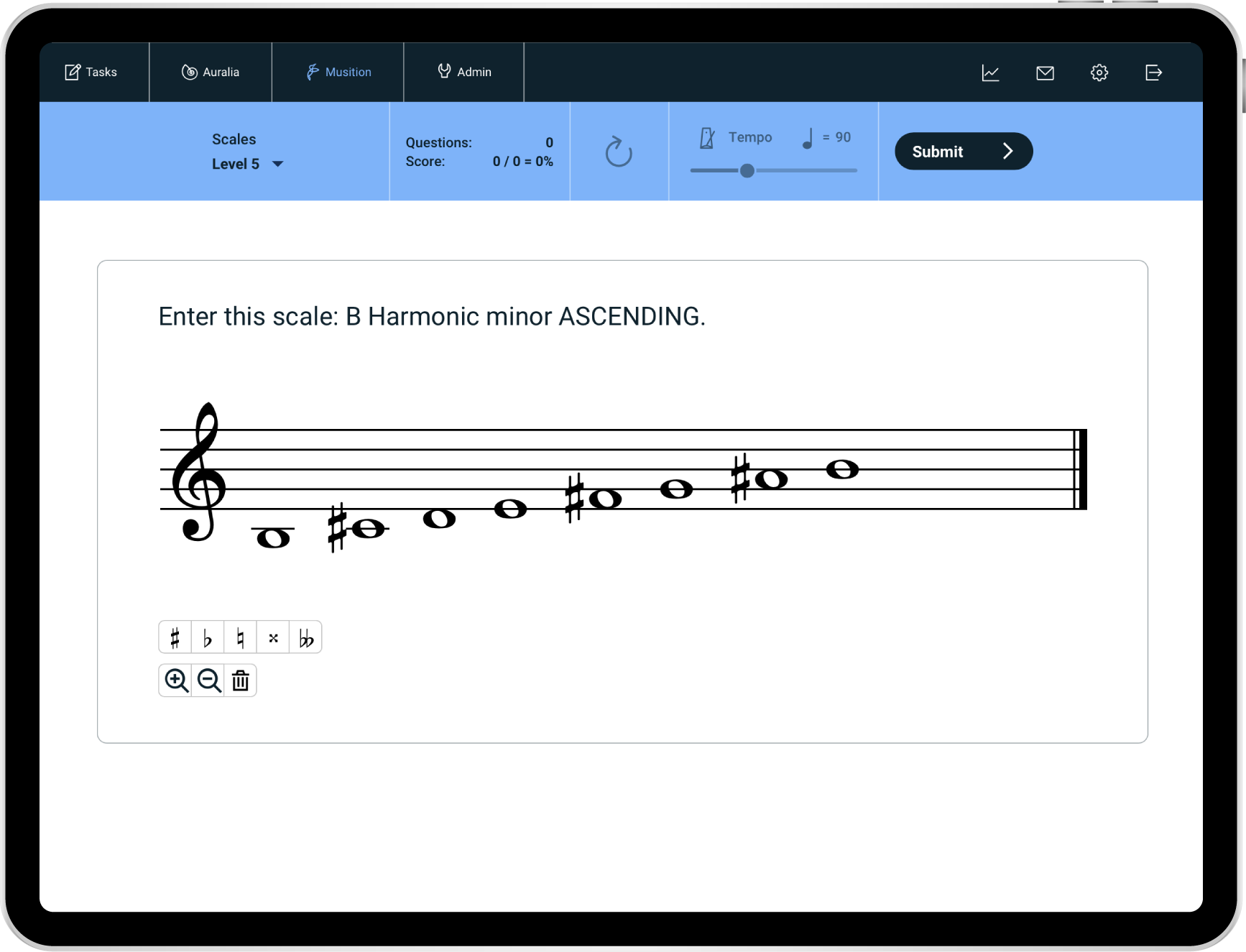 A rhythm without beams is shown on screen, and you are asked to enter the correct beams.

Identify time signatures and their characteristics.

Complete the bar with the correct number of notes or rests.

Test your knowledge of note and rest values.

Tap back a rhythmic pattern with your left and right hands.

Tap back the rhythmic pattern shown on screen. The pattern is one part (eg: Snare Drum part) of a rhythmic style that would commonly be played on a drum kit.

Tap back the rhythmic pattern shown on screen. You may also tap the rhythm in using an external MIDI device such as a keyboard or wind controller, if connected.

Test your knowledge of note and rest values, and the concept of subdivision 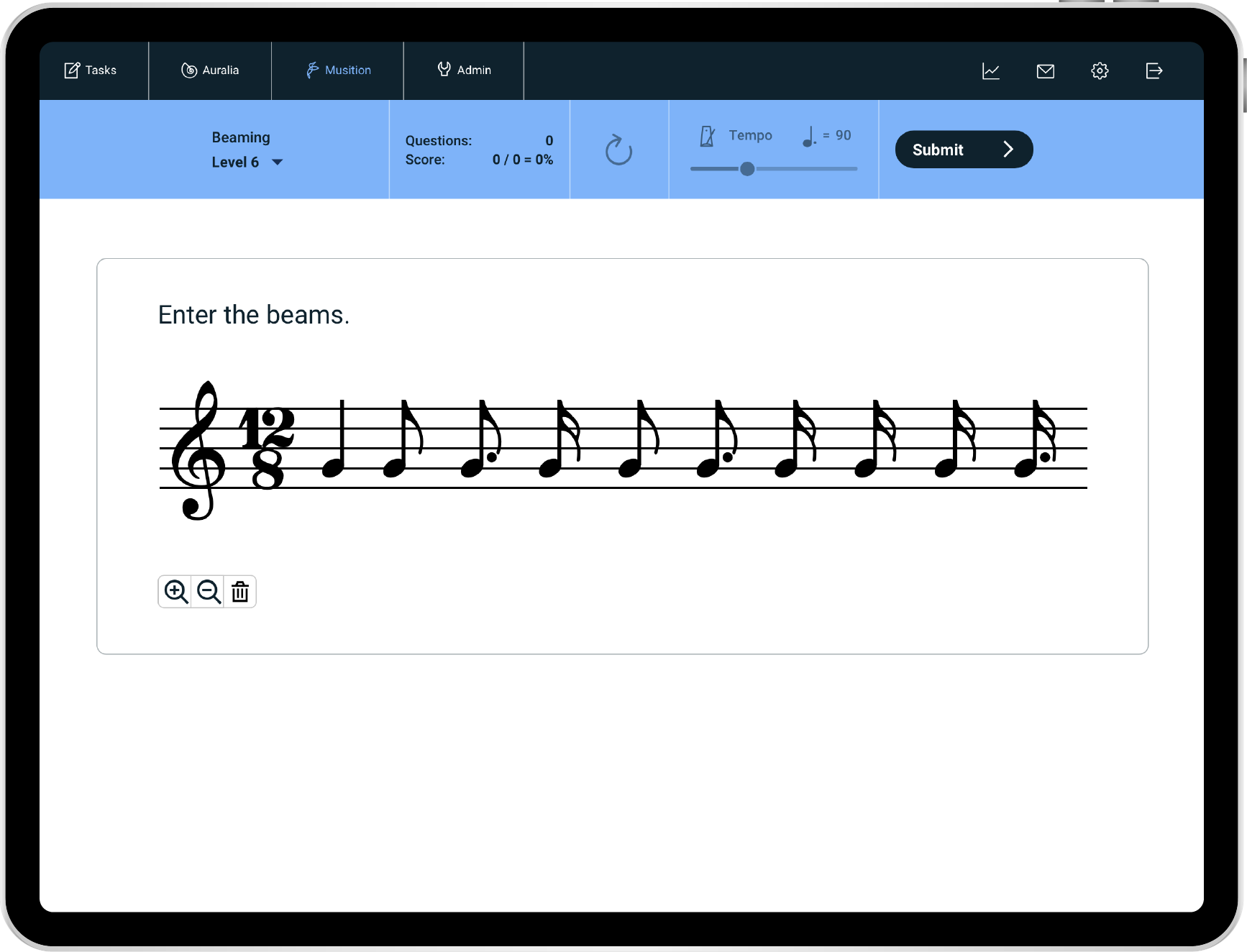 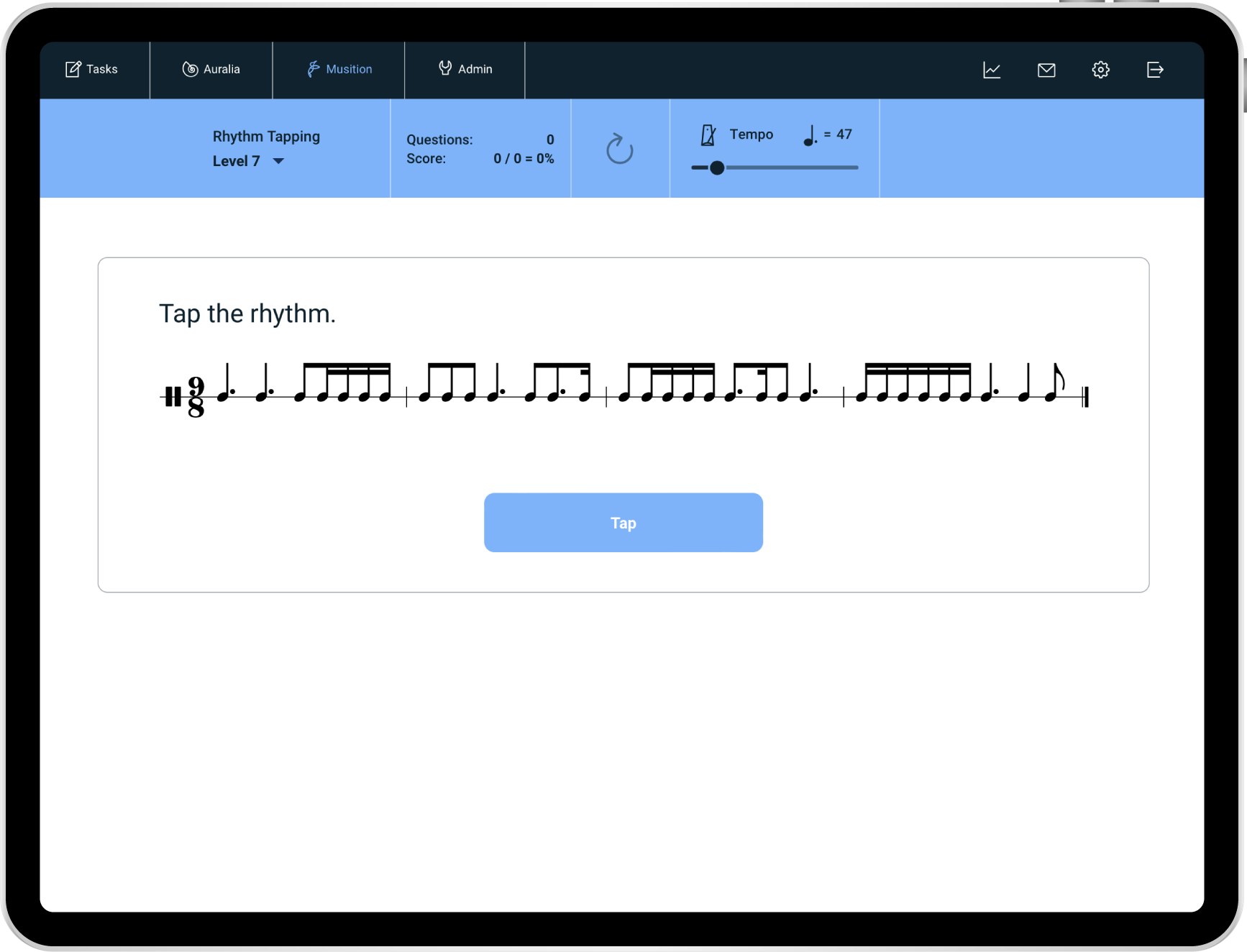 Add counting to a displayed excerpt.

Test your knowledge of note and rest values, and the concept of subdivision

Practise tapping more complex rhythms, with one or two hands.  Many common patterns such as 3 against 2 are included.

Identify the chord that is represented by the guitar symbol.

Test your knowledge of common musical concepts, the fundamentals of written vocabulary. Questions are multiple choice.

Identify chord symbols, and the structure of the chord that they represent.

Test your knowledge of common symbols that are found on scores. Questions are multiple choice.

Test your knowledge of common terms that are found on scores. Questions are multiple choice. 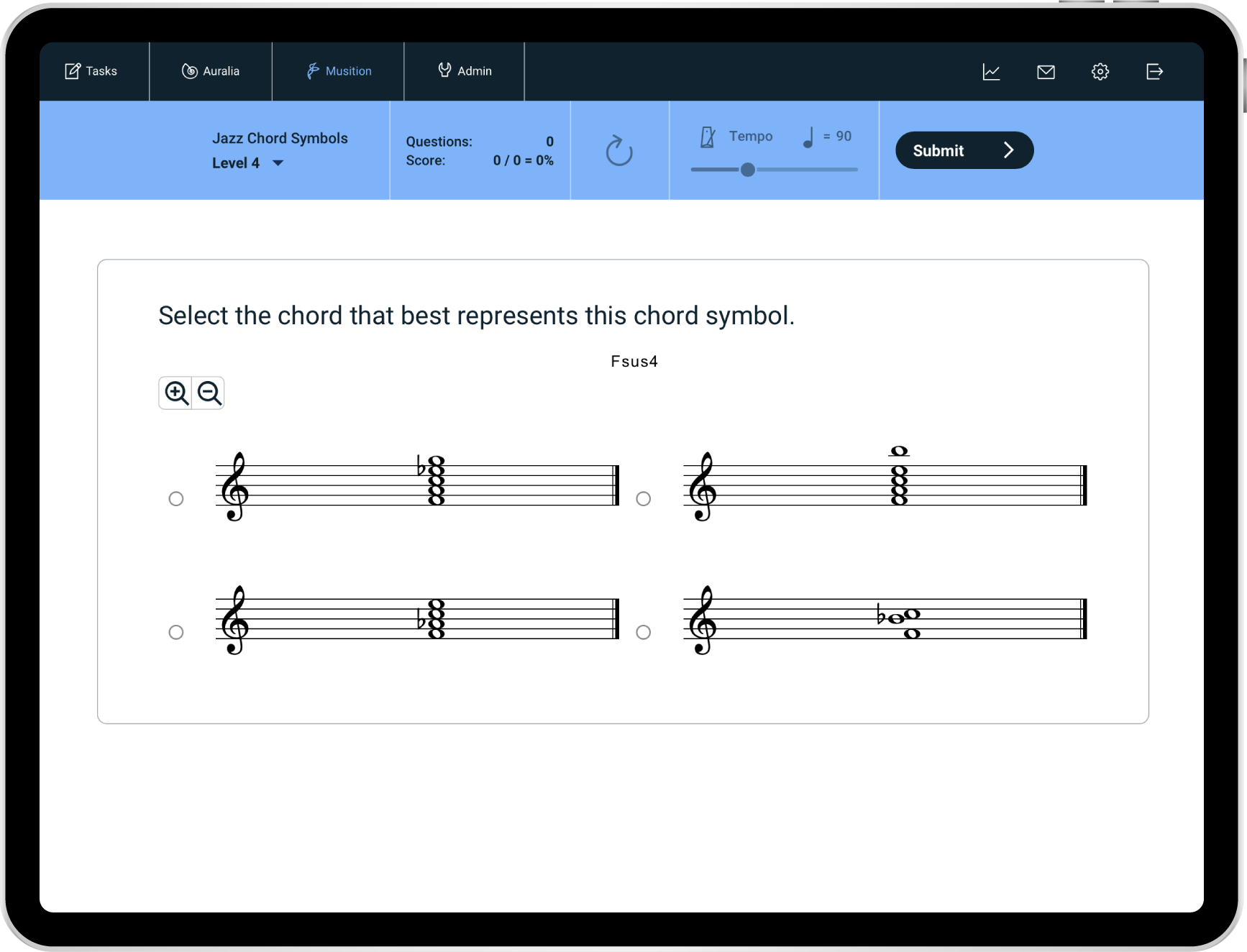 Identify a chord that is shown on a staff, or enter a chord on a staff.

Assess your knowledge of keys, in particular, the number and type of accidentals that keys have and the order in which they appear on a staff.

Visually identify cadence types and the chords which form them.

Identify a chord that is shown on a staff, or enter a chord on a staff. The chords will be based on the scale degrees of the Major and Harmonic Minor scales.

Realise given figured bass, enter chords notes on the staff.  Includes all triads and sevenths, with inversions.

Identify a chord that is shown on a staff, or enter a chord on a staff.

Relate chords and scales, in a jazz context. 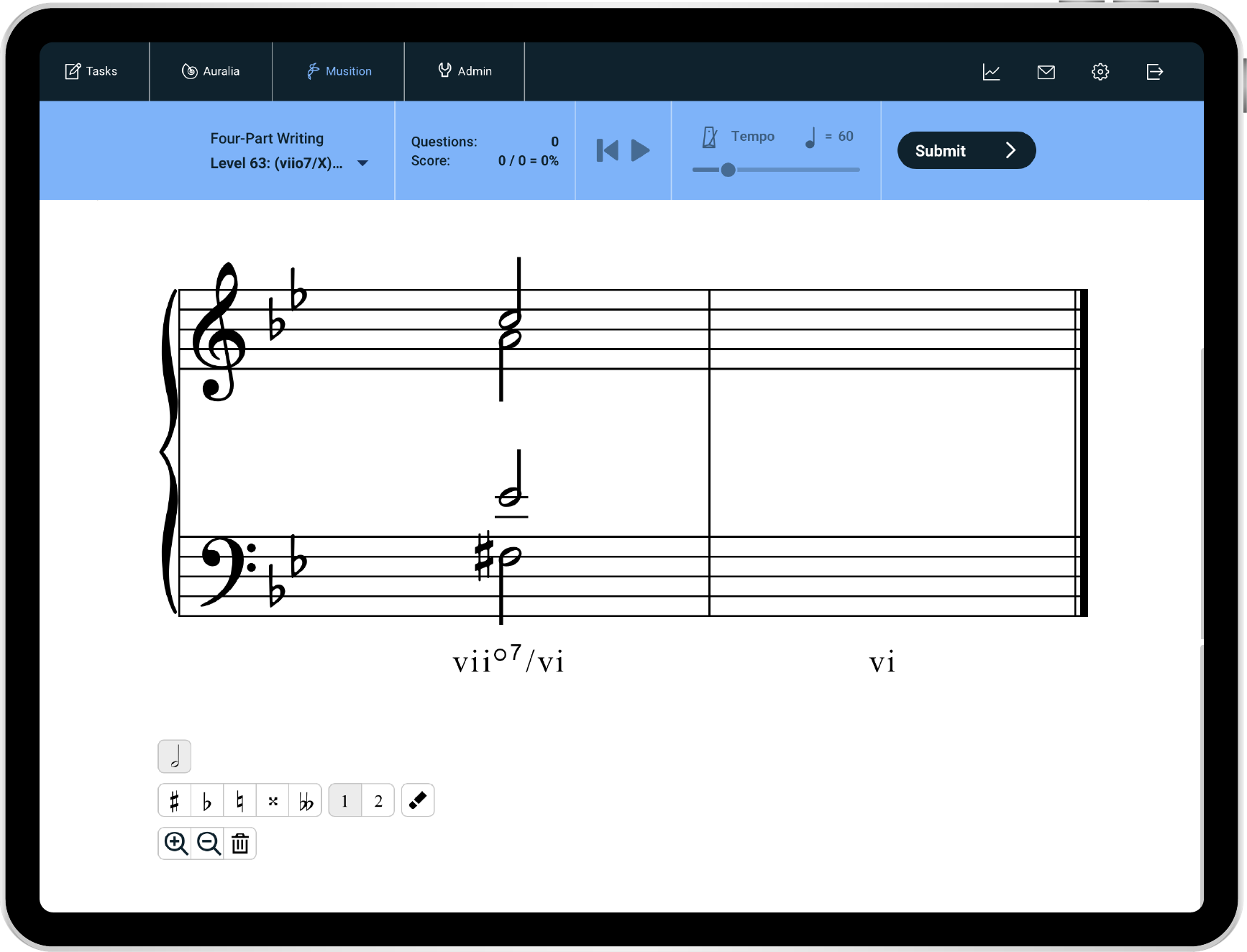 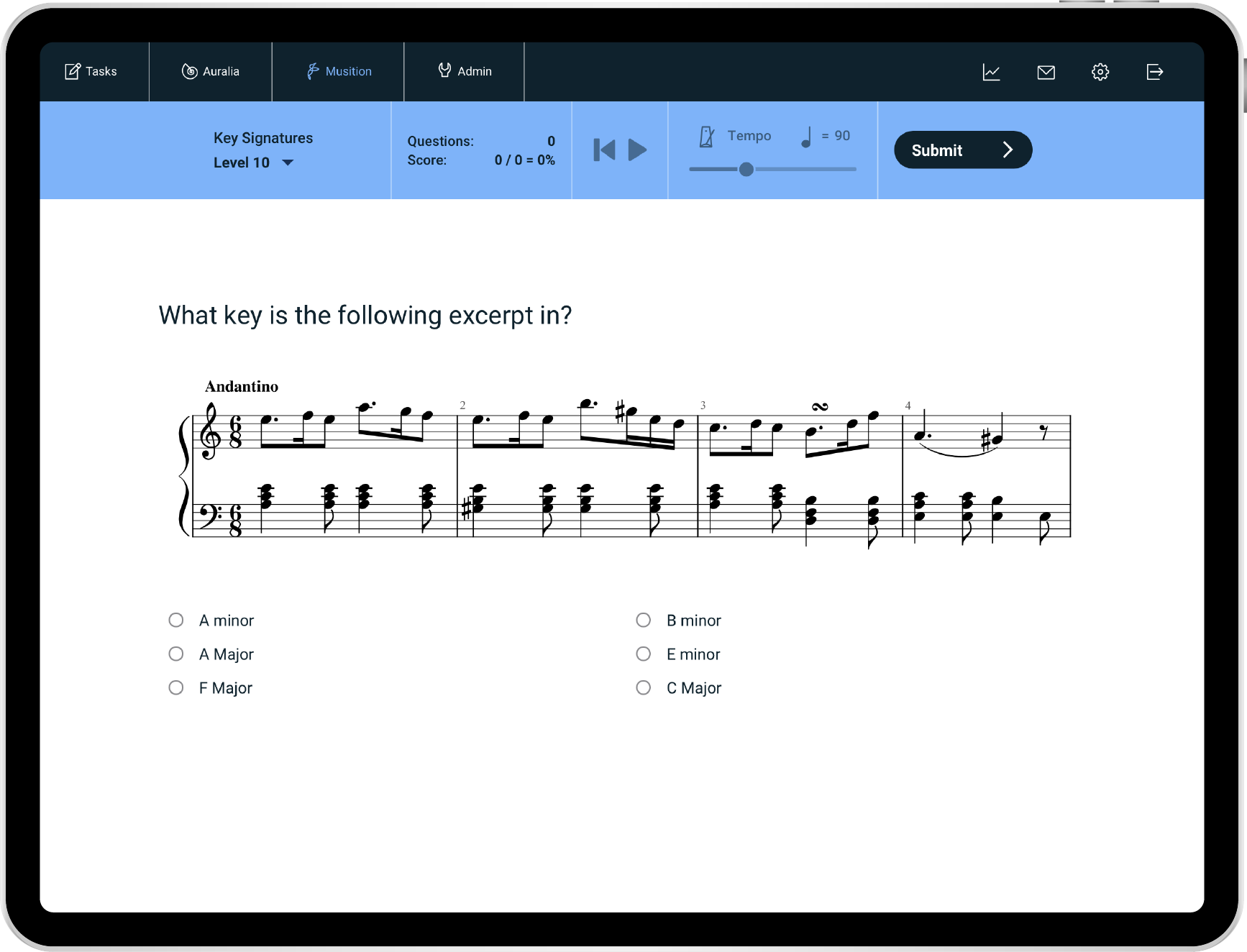 Identify the type of modulation (eg. Major Tonic – Relative Minor) or identify the final key of the example.

Identify the chords that include the given scale degree.

Transpose short melodies from one clef to another.

Identify the range of various instruments.

Identify the keys of various instruments, and identify the most ‘common’ key.

Identify notes and enharmonic equivalents on the piano keyboard.

Instrument examples are played (WAV files) and you have to identify the instrument from a number of choices.

Transpose to and from concert pitch and the correct key for a particular instrument. 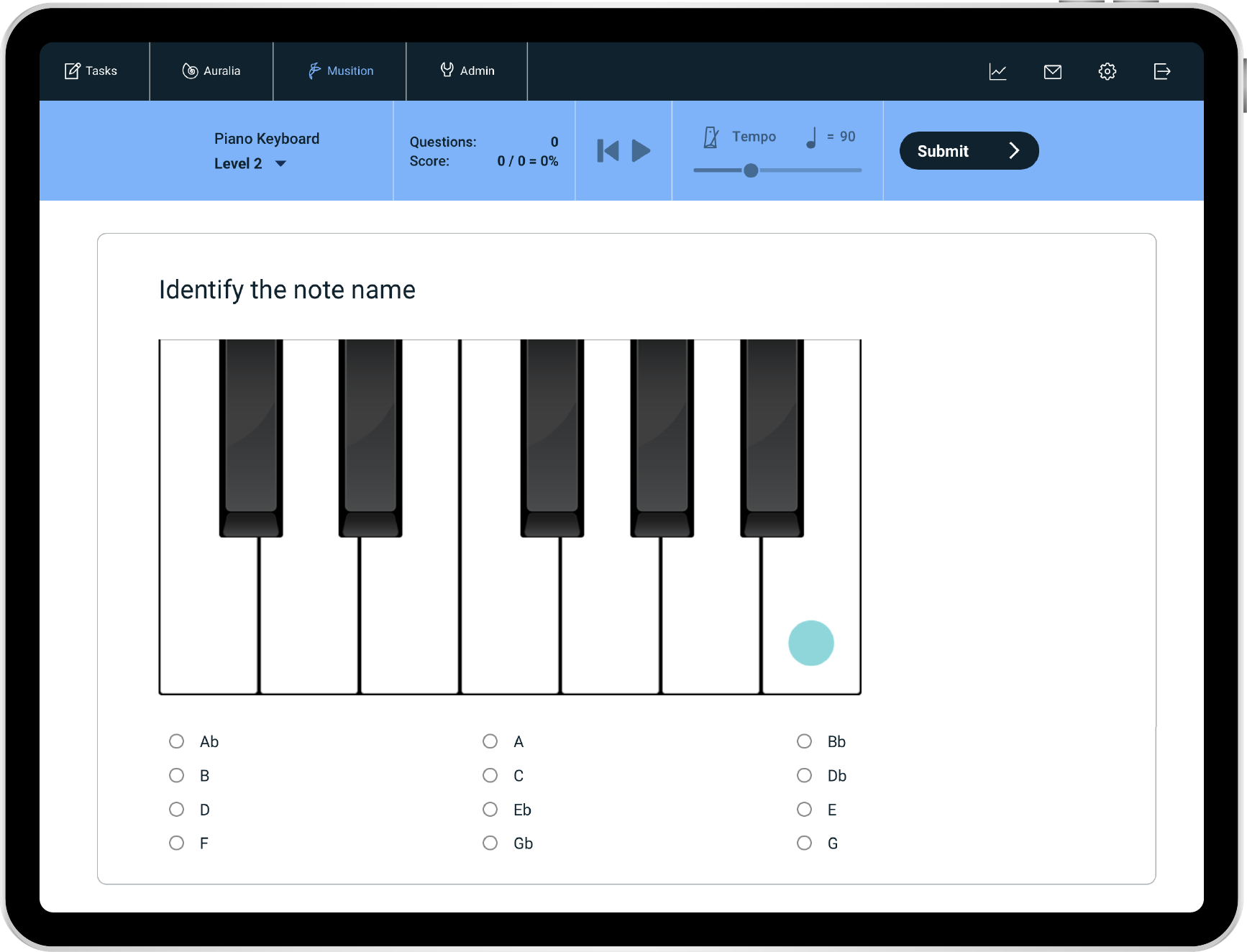 Recognise the texture and changes in texture.

Identify phrase structures and form including sentences, binary and ternary.

Identify the characteristics of various sections in popular music. 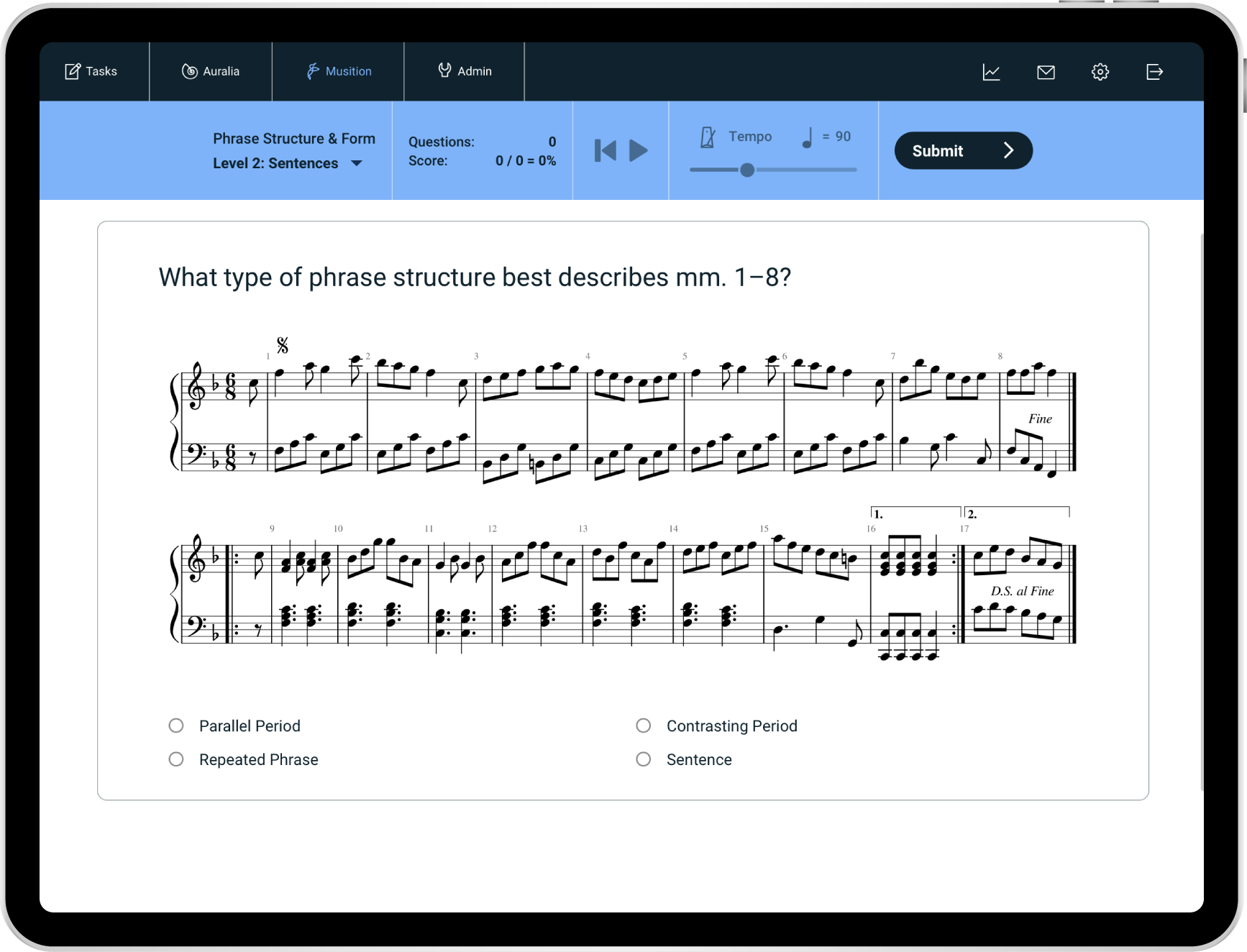 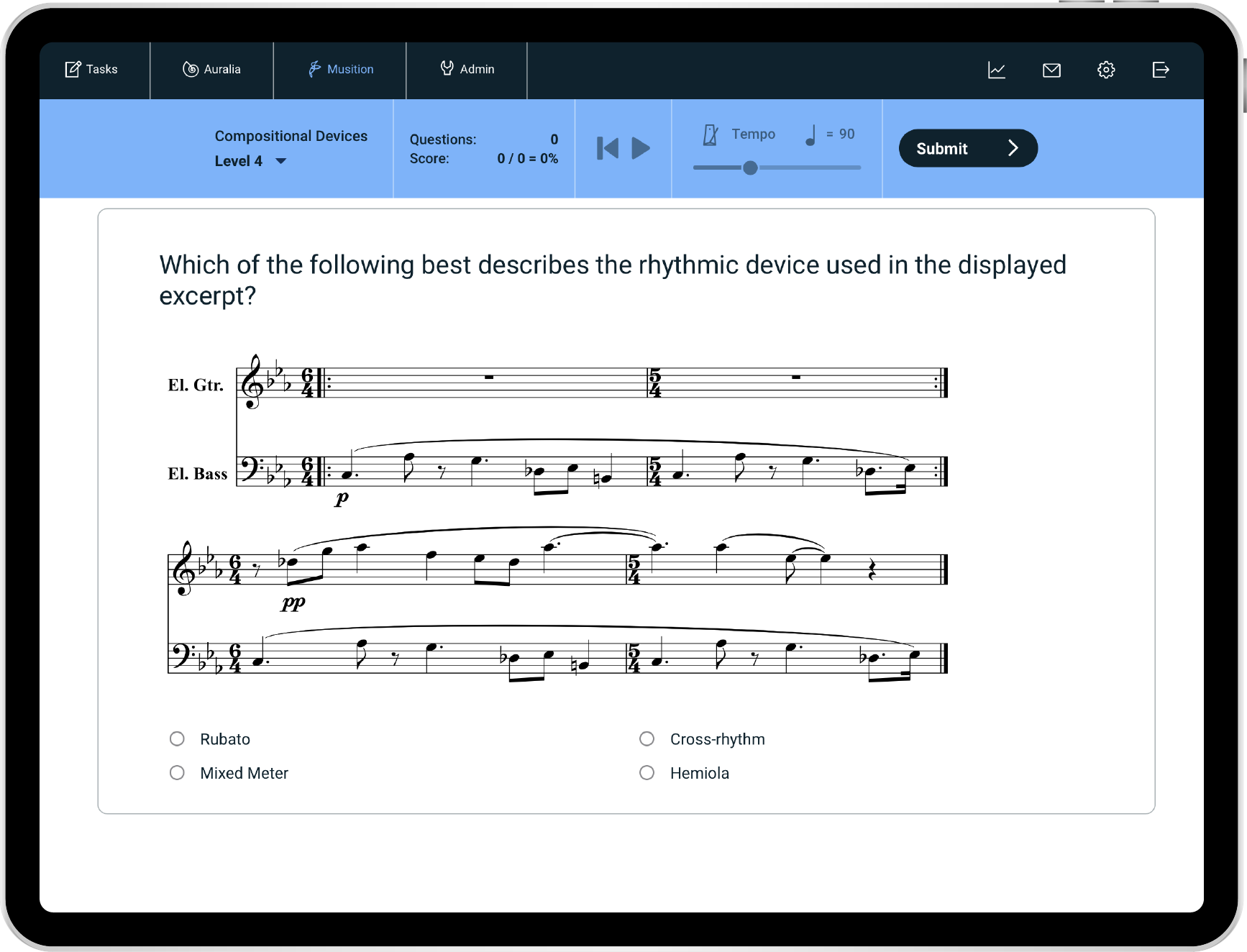 Enter mechanical voicings below a given lead note.